Fossils Stuff was the first UK racing drone manufacturer to introduce HDPE (High-Density Polyethylene) frames to the UK market. First sold in 2015 they soon became a great hit due to their robustness and Lifetime Warranty offered with every frame.

Although not the lightest of frames they proved to be very popular with beginners who wanted something fairly quick and that did not break every flight. The Gravity frames are still available from the website shop in various sizes ranging from 180mm to 280mm. The latest and probably best of these frames is the FSGX 210.

Martin Rye, the business owner and designer, manufactures the frames from a factory unit in Hampshire alongside his main business Tek-Tanks Ltd.

Since the Gravity range of HDPE frames Fossils Stuff introduced the first vertical arm carbon racing frame to the UK with its revolutionary rigging known as the Revo. The Revo range of frames is available in 4 sizes, the Revo3, 4, 5 and 6, with the numbers being the corresponding prop size. The Revo 5 won probably half the races in the 2017 racing season flown by Jon “Smoky” Rogers the Fossils Stuff main team pilot.

The end of 2017 led to a new frame being developed for Smoky as his signature frame. The Revo, although quick, was beginning to be beaten by lighter and less complicated frames and so the S1 was born. This frame has already won the first two main races of the 2018 season.

Alongside the development of the S1, Fossils Stuff has been working on an X Class frame. Initially started in America as a giant drone racing series with frames between 800mm and 1200mm, it has now crossed the pond and Fossils Stuff is leading the way with X Class here in the UK. 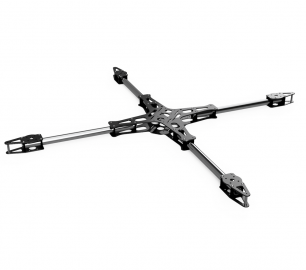 The Fossils Stuff THOR is an X Class Racing Frame with 800mm motor centres. Can be flown with up to 12S batteries for ultimate performance. 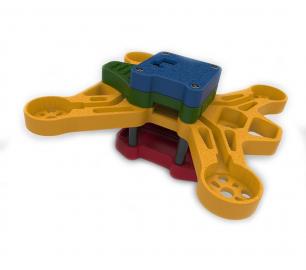 The Gravity 180 FPV Racing frame has been CNC machined to the highest tolerances from four pieces of HDPE. This frame must be one of the toughest racing frames on the market and comes with an optional Lifetime Frame Warranty.

The Fossils Stuff S1 is Smoky FPV’s signature frame. At the end of 2017, it was clear that the Revo 5 was becoming less competitive although it had had a great season with some incredible results, it seemed that it was just not light enough! Smoky requested a lighter frame and with his valuable input we came up with the S1.

The Gravity 250 is Fossils Stuff original High-Density Polyethylene (HDPE) racing frame and the first frame in the UK to be made from this incredibly tough material. Many hundreds of these frames have been sold to date.

The Gravity 280 FPV Racing frame has been CNC machined to the highest tolerances from two pieces of HDPE. This 6” frame must be one of the toughest racing frames on the market and comes with an optional Lifetime Frame Warranty*

A true X frame for 5″ props. The FSGX 210 Racing Frame has been CNC machined to the highest tolerances from three pieces of HDPE. This frame must be one of the toughest racing frames on the market and comes with an optional Limited Lifetime Frame Warranty.

The Revo series of carbon fibre FPV racing frames uses a revolutionary rigging system made from state of the art dyneema cord to stiffen the frame arms. 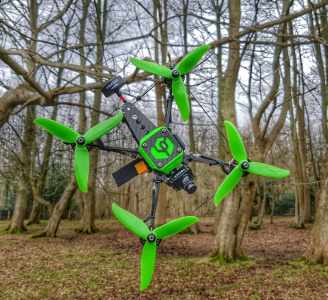